THE END IS NEAR! 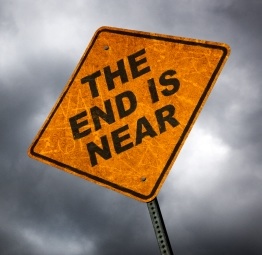 If there were a beginning of something there has to be and end of it, right?

The end of ‘something’ has always been near, but is THE end really as near as some people would like for us to believe?  Maybe, maybe not.

After 25 years on this journey of ever growing to live a  more self-sustained and prepared life – I’ve heard various cries of the ‘end’ being near.  Some of which were out of sheer desire to motivate, while others were out of selfish ambition to motivate others to purchase a particular product or adhere to a specific  ‘philosophy’.

My view is that there will not be a definitive ‘end’ to the world as we know it (TEOTWAWKI).  Not one prior to the return of Messiah anyway.  But rather a shift in priorities that will cause life choices to change.  Haven’t you seen that in your life already with the increase of gas prices, utility prices and food prices?  You choose to drive less often or handle multiple tasks when you do; you may choose to open windows more rather than run the air conditioner or perhaps have tried to cut your grocery bill in order to keep in back into check where it was months ago.

No.  I do not believe ‘the end is near’.  Not near as in this (Mayan) calendar year – but rather the end of many creature comforts and self serving time consumers that will fall to the wayside of more meaningful and life-sustaining priorities.  That may not be a bad thing to see come to an end.

Actually, “the end” may be just the beginning of the world as it should be.